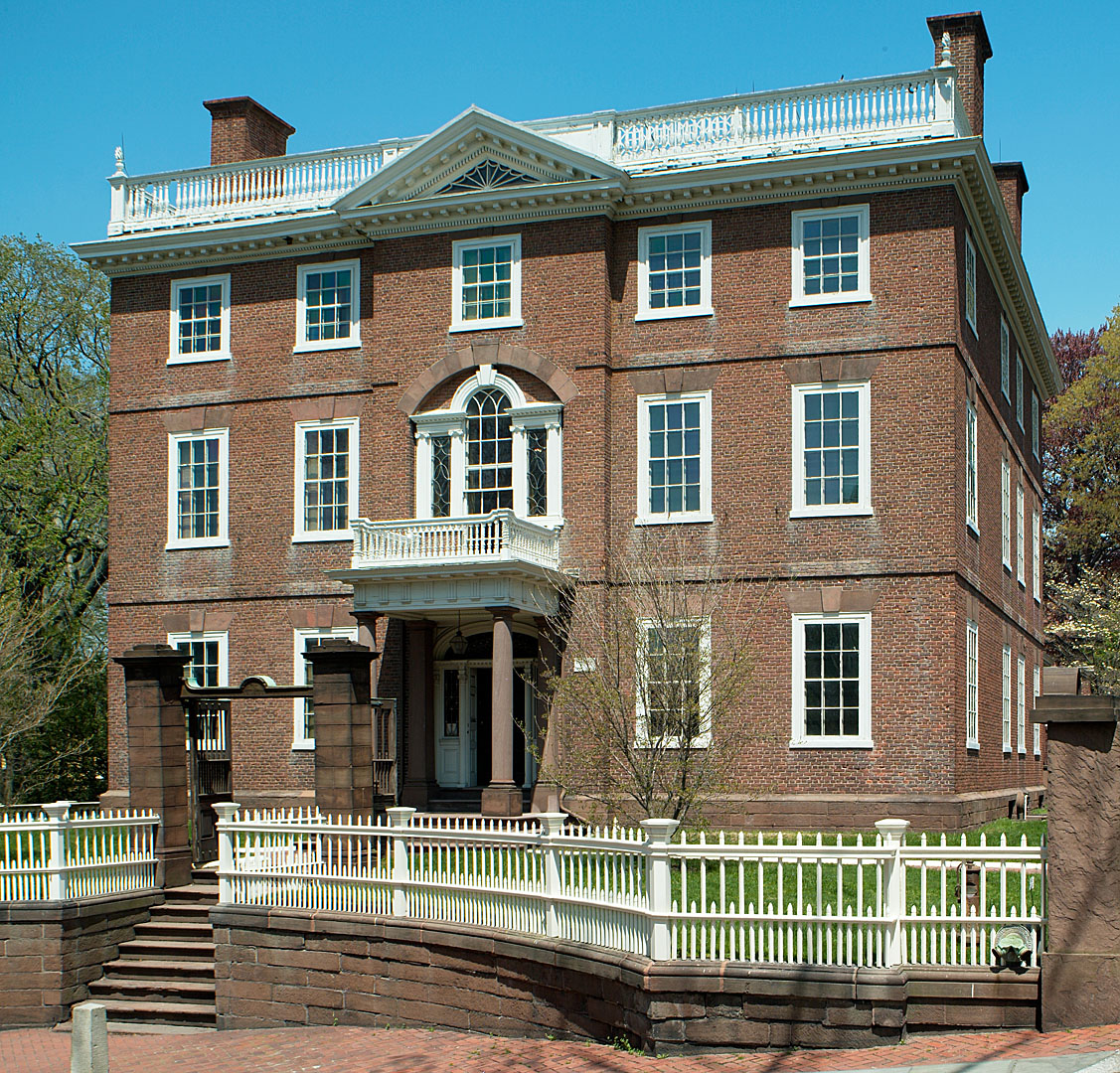 While the cubic brick block had been a local expression of wealth for almost two decades by the time this was built, the John Brown House far outstripped any house built in Providence until then. Dwarfing the Russell House in both size and scale, it abandoned for the first time in local history the restraints of the longstanding urban tradition of building to the lot line along a tightly serried street so as to create an almost suburban setting. Commanding its environs from atop a knoll and somewhat haughtily turning its face from Benefit Street, it assumes a posture appropriate for an owner who, as a child, described himself as “the Cleverest Boy in Providence Town.” John Brown (1736-1803), a lifelong advocate of slaving (to the degree of advocating the cause on the floor of the House of Representatives as late as the nineteenth century), was the most aggressive of the four brothers who inherited the family’s coastal-shipping and privateering business, which they expanded into the notorious Triangle Trade, becoming among the first to reap the profits of the China Trade after the Revolution. During the same time that Brown’s ship George Washington was plying its maiden Far East voyage, this house was built on land held by the family of his mother, the Powers, from whom the street more than appropriately takes its name. John Quincy Adams who saw it soon after completion characterized it as “the most magnificent and elegant private mansion I have ever seen on this continent.”

The house remained in family hands until the beginning of the twentieth century, when it became the home of Marsden J. Perry (1850-1935), banker and electricity and streetcar magnate (a convenient monopoly when electric companies controlled the streetcar fares). Shortly after Perry’s death John Nicholas Brown bought his great-great-great uncle’s house and donated it in 1941 to the Rhode Island Historical Society, which manages it as a house museum, open to the public.

What we see now is Brown’s original cubic house with an ell added in the late nineteenth century, overlaid with Marsden Perry’s Colonial Revitalization at the hands of Stone, Carpenter & Willson. The interior is organized around a central stair hall with two rooms to each side. Interior detailing shows the elaborate, gutsy detail that lingered here for so long. Much of what we see is original, but Perry’s additions included the hardwood floors, decorative plasterwork in the southeast parlor, paneled library in the basement (which held his Shakespeare collection, now in Washington’s Folger Library), and the elaborately finished second-floor bathroom with ceramic tiles after Adolphe William Bouguereau. Diagonally across the street is the Colonial Revival building erected by Perry to house horses, carriages, and automobiles at the time he moved to the John Brown House. It achieved its greatest notoriety, however, beginning in 1983, when it became the home of then-mayor Vincent A. (“Buddy”) Cianci (1941-2016), whose felony conviction in the 1980s precipitated his legal removal from office, though he returned in a landslide victory in 1990. The effective, popular, and charismatic mayor was convicted again in 2002 of felonious corruption charges and once again removed from office. Magnificent and impressive as this complex is, it also recalls, as few other places, the prurience of power.

© 2022 Guide to Providence Architecture. All rights reserved. Design by J. Hogue at Highchair designhaus, with development & support by Kay Belardinelli.